You know that moron that manages our club? Yeah, he has to go.

I haven't done a blog post in ages, so I apologise for that, but I thought I have to address this as I don't think we've brought it up enough on our blog. We mention it more over on our Twitter.

Anyway,  the fool that manages Everton Football Club must leave. I don't care whether he's sacked or leaves on his own accord, just get him gone. For those who don't know who the baffoon at the managerial position is (I'd be supried if you didn't); it is Roberto Martinez.

We were unsure if he was the right successor to Moyes, but immediately we gained hope about the future with Roberto, as Bill Kenwright claimed, "Almost his first words to me were: I'll get you in the Champion's League."

The joy we had when we heard that! Bobby then brought in class players, such as Romelu Lukaku and Gerard Deulofeu, on loan, then went on to have a very successful season, gaining 5th place in the Premier League, securing Europa League football the following season. It wasn't Champion's League, but hell, we were on the rise. We had got into Europe, flying high with the "big" clubs!

The following season, the 2014/15 season, was where it started going downhill for Everton and their manager. We bought a few new players, including Romleu Lukaku on a permanent deal, but lost Gerard Deulofeu, who was a great player for us in the previous season, as he went on loan to Sevilla.

Despite Geri leaving, we wanted a successful season and wanted to hopefully qualify for the Champion's League, like Martinez promised. Let's be honest, it didn't go down like that, did it? We were knocked out the Europa League in the quarter-finals, and we got to 11th in the league... Considering our aim was a top 4 spot, we did extremely poorly.

We started the season with an ambitious mind; we wanted to get somewhere, wanted to challenge the top 4. First few games were okay, working our way through results, almost comfortably in the top 7/8 of the table. The league was so tight to begin with so we always had a chance of getting at least top 5 easily.

We looked relatively strong with Lukaku, Deulofeu and Barkley working together and managing to get Lukaku as one of the top 3 league scorers. New signings Ramiro Funes Mori and Aaron Lennon were performing well. It was all grand for the first few bits of the season.

However, come towards the middle of the season, Tim Howard began under-performing, along with John Stones. Everton fans thought, "fair enough, they're out-of-form, the manager will swap the team around for a few games so our top players can have a bit of a rest - Martinez is not an idiot." Well, how wrong were we!?

Roberto seemed to be picking the players he prefered, picking favourites, over the players in-form. Tim Howard, dubbed "Starjump Nonce" for a while, wasn't moved from the starting position, despite Everton's number two, Joel Robles, performing superbly in the Capital One Cup.

Joel continued his form in the cup until he was eventually put into the starting lineup, (and has been there ever since) but fans were more relieved that they had a goalkeeper with a better ability in goal, rather than being thankful towards Roberto for changing the lineup as it was a long overdue change that had to be made.

Being Knocked out of the Capital One Cup

Speaking of the Capital One Cup, Roberto Martinez also managed to piss the fans off in this competition, not just the league. The semi-finals against Manchester City. A great chance for Everton to gain some silverware after 21 years. The first leg was perfect - a comfortable 2-1 win, fantastic.

The second leg however, didn't have the same glory.We lost 3-1 to quickly explain it, meaning the aggregate score was 4-3 to Manchester City, and we came tumbling out of the cup. Many fans would defend Martinez in this situation though, explaining the referee decisions were appauling, which I'd agree with - but that doesn't mean that Roberto didn't have a part to play. For some reason, Martinez has no ability to hold a lead, in both the league and the cup. Bad tactical decisions and substitutions? Most likely.

Actually, whilst we're on it, I'll go in-depth about his substitutions, mainly because it's fresh in my mind after the poor subs Martinez made in the Manchester United game earlier today.

Why is he a Bad Manager?

There are many different reasons why Roberto is a bad manager. Certain scenarios in Martinez's game which he can't handle and which are probably the MAIN reasons we're, basically, crap. He is unable to tactically sort them out. I'll explain a few right now.

They're the main parts to Roberto's faulty management. There's probably more but they're the few I can think of at the moment.
Youth Development

Despite me just hammering down on Roberto with critisism, I can accept that if there's one thing he's good at, it's developing young talent.

Martinez has lots of talent in Everton's academy and he has brought players like Ross Barkley and John Stones into the first team as young, English talents. He has also brought in young players, such as: Romelu Lukaku and Gerard Deulofeu.

Our young talents are adored by other clubs. You always hear stories about the clubs after Ross Barkley, John Stones and the rest of the young first team squad at Everton.

But the players who aren't always noticed, despite still being upcoming talents, are the players in the Everton U21s, U18s, etc. Harry has done a blog post on a few of the young prospects a couple of months ago - Have a gander here.

Now, I'm not going to lie to you - This isn't it. I could continue to go on about Martinez's flaws, writing for hours on end, even conquering outside of the football, with that video of Roberto dancing to Jason Derulo, or the most recent decision of having these photos promote Chang Beer and Everton... (Probably wasn't Roberto's idea, but it's still embarrising for the club) 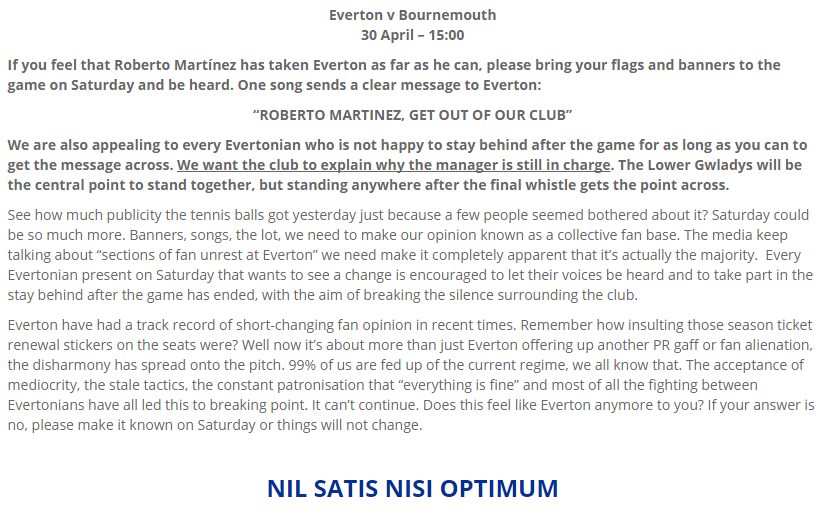 Why is that even a thing...

Anyway, to conclude Roberto Martinez needs to go. Simple as that. Not good enough for our club. We currently sit in 12th in the Premier League with a manager who started his managerial career with Everton claiming "I'll get you in the Champion's League," and managed to get us to Europa League and a Capital One Cup semi final in the two years at the club.

Still think our manager is the right man for the job? Well, to finish, I'm going to show you statistics I found, as we all know stats don't lie, and posted on our Twitter about the Spaniard who manages the club. This is his Premier League (from both Wigan Athletic and Everton) record, and it's not pretty.

(Please don't nab the graphic!! Too many people have nabbed it and posted it on their Twitter pages. The original is on our Twitter.)

Are you convinced yet? If you're not, I'm suprised, but send our Twitter (@1878Blog) a tweet explaining why you think Roberto Martinez can manage our club.

Sorry it was so long. It's probably the longest thing I've typed in one sitting in my ENTIRE life, let alone just on this blog!

Like I said, give us your thoughts about this situation on our Twitter, and we'll try to be more consistent with the blog posts.