Who should be our number one? Who is the better goalkeeper? Who deserves the more first team football? 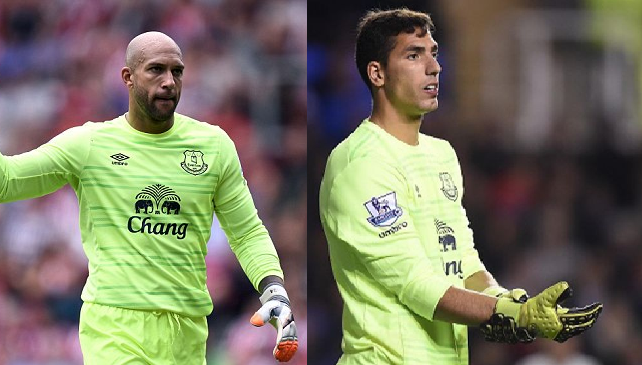 These are all questions Evertonians ask every week after another game with Tim Howard in goal. Many question whether Howard should make room for the younger, less-experienced Joel Robles. I'll take an in-depth look into the stats of the two shot-stoppers and compare to see who deserves the first place in goal.

Now, just a disclaimer, I don't claim to be a pundit or any sort of statition; I'm just a fan, who is interested in seeing the statistics of Howard and Robles after seeing many stats comparing the two on Twitter.

So let's look at their profiles, first:

Tim Howard is a 36 year old, American goalkeeper. who joined Everton back in 2007, with 3410 appearances in all competitions (including his loan spell at the blues in 2006/07). He has been the number one for many years.

Joel Robles is a 25 year old, Spanish goalkeeper, who joined Everton in 2013, with only 23 appearances in all competitions. He has the official number one on his shirt for the club, but has never been our first choice keeper, due to Tim Howard.

So, from the stats, this year, Joel Robles has been better. Compare Howard's 6 wins in 22 appearances to Robles' 6 wins in 6 appearances.

Now, let's talk about the league. Tim Howard has has 22 appearances in the league this season and has drawn 11 and lost 5, and also winning 6, giving us 29 points in the league so far. From the draws and the losses, we have lost 37 points.

Let's say we play Robles as our first team goalkeeper for the games that were drawn and lost. From Robles' showing and stats in his 6 appearances this season, I'd estimate that out of the 16 games that were either drawn or lost, we'd win about 9 games.

If we tally the points from winning the 9 games, we'd gain 27 points. If we say we take away 3 losses and 5 draws from our current season to have as wins, we'd have 37 points in the league.

With 37 points, and the league table staying exactly the same for every club other than Everton, we'd be 5th in the league, which is where we should be aiming for.

Obviously, this is only a thought and not accurate enough to be fact as I literally just made up that we'd win 3 of our losses and 5 of our draws, it was just a guess based off his cup form, so I wouldn't use it as solid evidence for Robles being our number one, but it's certainly interesting to think about.

I wasn't 100% sure that Robles was the best man for the job, so I looked at their form over a certain period of time. Joel Robles joined Everton at the start of the 2013/14 season, so I will compare the stats from then, to now.

Joel Robles, on the other hand, has had 23 appearances, with 5 clean sheets, in all competitions. Robles has a clean sheet percentage of just 21.7%.

So since Robles joined the blues, Howard has been performing better than him overall, but only by 6%.

With Robles perfoming so well this season in the Capital One Cup, I'd still say that with only a 6% difference, and with a better record this season, Joel Robles should be our number one.

Howard is past his prime at the age of 36, and Robles seems ready for the first team, and we can see his quality throughout the Capital One Cup this year. No matter what though, if it's not Joel Robles that should take over Howard, it's a new goalkeeper we need to bring in. Like I said, Howard is past it, so whoever steps up between the goalposts, if it's Joel Robles or another keeper we buy in, we need to replace Tim Howard.

Cheers for reading, it was a long one.

Sorry it's not the greatest analysis in the world, and being so badly worded, but I really wanted to write this.