Transfer Rumours Round Up - 4th November 2015

Welcome to the first Transfer Rumour Round Up on our blog!

There will be a round up of the weeks transfer rumours every Wednesday! 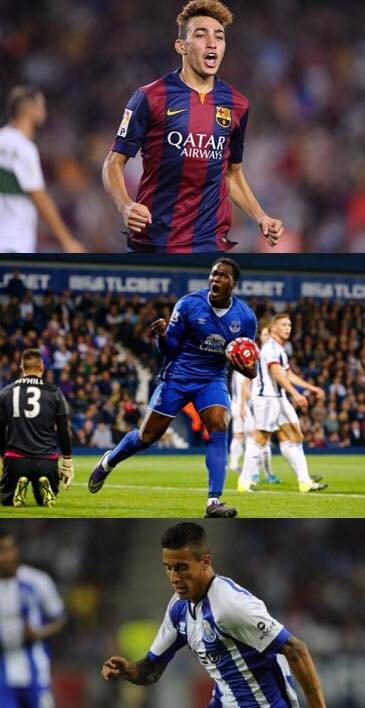 Tello, the Barcelona winger, is currently part-way through his two year loan spell at porto.

This is not the first time we've been linked with Tello and with Roberto Martinez maintaining a good relationship with Barcelona after the Deulofeu business, this one could well and truly be on the cards. However, the Catalan seems to be also be on the radar of Jurgen Klopp.

Another young barca winger?! Yes thats right! Munir El Haddadi is the next player linked with us.The 20 year old winger will be looking to leave Barcelona in January and Everton is looking likely to be his destination.

The Toffees boss maintains good relations with the Catalan giants after taking Gerard Deulofeu on loan before signing the winger over the summer. With Deulofeu reportedley encouraging his old team mate to join him at Everton, Roberto Martinez will be looking to seal a deal.

With so many links to wingers, we cant help thinking about a possible exit for our man Mirallas? With Martinez not giving him game time this season, all the signs point to it right? Well, apparently not as Everton are not expecting Mirallas to push for a move in January. However, we're not quite sure, with Spurs, West Ham and others apprently interested. We'll just have to wait this one out!

Yes - you read it correct! PSG are apparently looking at Lukaku to bolster their attacking options. The fee they're discussing is 40m-50m pounds, with Lukaku in excellent form, scoring 6 goals in his last 11 BPL games, with 4 assists also to his name so far in the 2015/16 season.  Questions are being raised, as if Lukaku was to leave, who would we replace him with? Watch this space.

Everton Target Inaki Williams maybe handed a new contact to end transfer hopes. The 21 year old forward for Athletic Bilbao has been linked to Everton along with a host of other clubs, but Bilbao are ready to hand him a new contract increasing his wage and buy-out clause.  Everton were close to meeting his buy-out clause of £14m last January transfer window, however, it wasn't to be in the end.

That's it for today! We'll be back next Wednesday with more rumours!